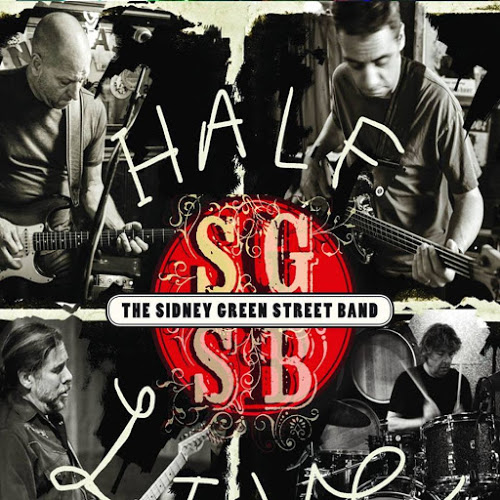 The hard rockin’, ‘mature’ expert players of The Sidney Green Street Band, have created one of the best albums of the year in “Half Live.”
The tribute to rockers/studio gone by, “Muscle Shoals” opens this half live, half studio recording. You have guitarists Lance Doss (also the lead singer here and solo songwriter) with guitarist vocalist Justin Jordan trading riffs, and making with the strong harmonies. The lyrically sardonic “Last Beer And Testament” is on this first six as well, as drum legend Steve Holly keeps things strong, solid and uncomplicated throughout and Paul Page provided the glue between it all with his subtle bass playing.
The ‘live’ side, recorded at The Great Notch Inn in Northern New Jersey has stellar rock drivers like “I Belong,” a tune with some great space and again rich harmonies; this band sound just like The Band here. “I Ain’t Sleepin’ with the Light On” burps and stutters with Doss and Jordan managing ‘call and response’ with their guitars as well as harmonies in the chorus. And “Rock Star,” is a star vehicle for Doss, bemoaning as much what he has as what he wants in another tight rye rock tune.
Hal Live from The Sidney Green Street Band is about the best stuff you are likely to hear all year.

This review was written by MuzicNotez writer Ralph Greco
The most popular MuzicNotez Magazine posts each week are awarded as our “Pick Of The Week“. Help this feature win by sharing it around.