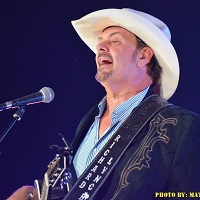 Even though Waynesville Ohio artist, farmer, radio show host Richard Lynch has been around for a while and has quite a few, particularly independent country music awards under his belt, he is still labeled by Billboard as an ’emerging artist’.
Doesn’t matter, because the fans of mainstream country music will catch on at some point, and Lynch will certainly emerge. “Love Tattoo”, his joint effort single with Ronnie McDowell will help, but there is a good chance “Keyboard Cowboy,” his latest effort might go a long way towards that goal.
In the good old country music tradition, Lynch comments on current cultural trends. Spiteful comments and Internet trolls are the subject of the single’s lyrics.:”I saw it on Facebook, so it must be true,” goes Lynch making a general comment about opinionated people who hide behind their anonymous or not so anonymous computer identities and make comments of all colours.
While the lyrics are current and trendy, musically Lynch sticks to what he knows and does best – traditional mainstream country, and along with his band members he certainly does it well. The lovers of ‘standard’ country music should be pleased with “Keyboard Cowboy.”