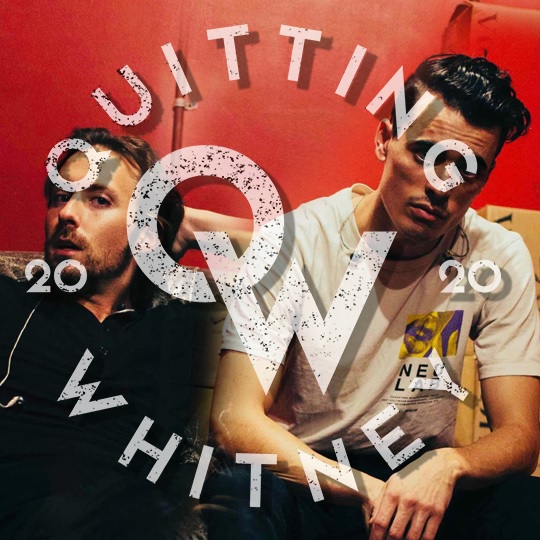 What do you do as new band when your first tour, scheduled to start on the literal day that the country begins shutting down due to the pandemic, is cancelled show by show? If you’re Los Angeles based alt-rock duo Quitting Whitney, you regroup, channel your emotions, and write one of your best songs to date. Following the positive press from their eponymous EP released in early 2020, QW was gearing up to hit the road and build their fan base. The dates were set and the venues were booked with a plan to start in the first half of March. Before they could get on the stage, the venues began closing and the band was left without any stages. They analogized the situation to “watching the lights in the hallway go out in front of us.” Dealing with the blow of having their maiden tour ripped out from under them, Quitting Whitney, comprised of Matt Rucker (producer, vocalist, songwriter) and Ryan Linderman (drums, percussion), headed back to Los Angeles to figure out a path forward. Both members agreed that writing new songs was the best way forward, but even then, the feelings of losing the tour coupled with the uncertain future still weighed on them.

When they began to write new material, Linderman recalls that even though the new songs were good, still feeling the sucker punch of the tour being cancelled and wondering what the new material was for. After all, there was no end in sight to the lockdown, and no promise of when live music could return. Eventually, the band began channeling what they felt into their single ‘LA Somewhere,’ eventually released on September 18th. The result of “ambiguous optimism”, Linderman describes the song as one that captured the bands mindset of just getting through this tough period, hanging on to their goals, and staying ready to execute when they can. Vocalist and principal songwriter Matt Rucker further explains this mindset and from where the song developed. Rucker came up with the chords while driving throughout the city on his daily work commute, and described the lyrics and meaning of the song as “knowing you are in the right place but not at the right time…knowing you’re in the right place but things may not be going 100% all the time but trying to stay optimistic about that.” The result is a dreamy, catchy, and hopeful song that swells musically and lyrically with the sanguine repeating chant “your in LA somewhere.”

The music video for the single not only enhances the song and but also explains some of the band’s background. Shot by a family member and with the use of drones, the video takes the audience on a journey throughout Los Angeles to meaningful places for the band. With both band members originally from the east coast (Philadelphia, PA and Richmond, VA) and also meeting each other in a different band, Rucker and Linderman used the music video to highlight places that mattered to them as a group. Two places in particular had to be in the video. The first was TR!P, the Santa Monica music venue where Quitting Whitney performed together for the first time. The second was Barney’s Beanery, a bar and restaurant that the duo frequented during the recording of their early demos. What makes Barney’s Beanery doubly special is the fact that the band’s name was partially inspired by a waitress named Whitney who routinely served them. The music video feels like a visual love letter to the City of Angels and is a perfect complement to the song. All things considered, ‘LA Somewhere’ is an impressive song and what makes it even more impressing is that it is the result from a situation that would have ended many other bands, especially brand-new ones. It is rare that a song can both stabilize and establish a band while also creating excitement and buzz for the future of a band, but that is what ‘LA Somewhere’ does. Fortunately, fans will not have to wait long for more new material from Quitting Whitney. The band has plans to release their next single, “Feeling” near the end of October. After purchasing ‘LA Somewhere,’ head over to quittingwhitney.com for more music and to get to know the band. I humbly suggest checking out the Our Story category on their website. Their story combined with their music is much needed medicine for the soul. We’re all chasing that something somewhere, and Quitting Whitney gives you the energy and outlook to keep going.